← Snow Detour
Was “The Plaza” The Right Name? →

A 1% Tax Equals How Much Transit?

Back in February, I wrote a post called “What Might Have Been.” In it, I talked about the aftermath of the repeal of the MVET (motor vehicle excise tax) in Washington State, and how it affected nearly every agency in the state. I was still living in the Tri-Cities at the time, so I focused especially on the effect it had on Ben Franklin Transit, and the amount of service that would’ve been lost had voters not approved an increase of the sales tax rate in 2002. After I wrote that, I ended up moving to Tampa for several months. While I was living there, I spent a lot of time riding the bus with Jason Eames (author of “Yo Bus Driver!”). Many times the subject of the abysmally low service frequency and hours of the local transit agency, Hillsborough Area Regional Transit, was discussed, and we both agreed that HART’s service was “small city transit in a big city.” As it turns out though, things might not have turned out this way had voters in Hillsborough County approved a 1% sales tax measure that was placed on the ballot in November 2010.

If the 1% sales tax measure was passed, 75% of the funds would have gone towards transit while the other 25% would have gone to road projects. This also included matching state grants and FTA funds for transit. According to the Hillsborough MPO, the old (and still current) property tax costs the average homeowner $45 per year to support transit service (in comparison with the average $720 in fares that each HART rider pays each year). The 1% would have cost the average household just $12 per month. Obviously, as an author of a blog with the word “Transit” in it, I’m very pro-transit and would have easily supported this measure. I’m fairly certain that the majority of my readers, especially my Tampa Bay area readers, would have as well. As part of the process to make the case for this new tax, officials at HART made a plan for the public to show how a 1% tax would benefit the community. The list is quite long, but yet impressive for a major metro that is behind the times on public transportation but doesn’t want to be.

– Frequent circulators linking specific destinations in the major activity centers, such as
businesses, medical and educational facilities, to the high capacity services (rail
and/or BRT)

-Some funding to extend the rapid services to connect to projects in adjacent counties, such as Pinellas County or Pasco County
– The projects are not currently designated 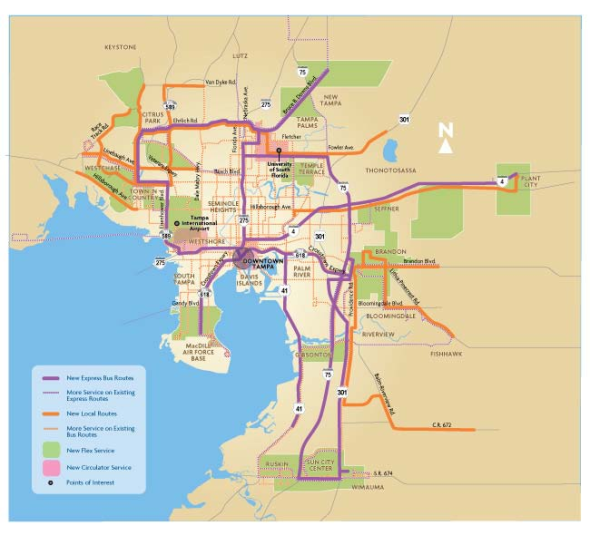 A map showing the service improvements for bus service.

A map showing the proposed BRT and light rail network.

As luck would have it, the sales tax measure did not pass. The final tally was about 60% against and 40% for. However, as is typical for these sort of taxes, support was higher in the more urbanized areas of the county and nearly non-existent in the rural areas. (This map of the results shows the results of each precinct.) A large reason for the defeat was the economy and a very anti-tax poplace. Reportedly, there was also confusion about whether this sales tax was linked to the completely separate Florida High-Speed Rail plan.

In the time I spent living in Tampa, I grew to like HART (mostly), but I hope for the sake of the residents of Tampa and the entire region that this sales tax measure is revisited and passed in the future so that Tampa will not be left behind as the “last major city without ‘real’ transit.”