Was “The Plaza” The Right Name?

In 1995, Spokane Transit opened up their downtown transit hub. Called “The Plaza,” it’s arguably the crown jewel of transit in the Spokane area, and easily a contender for the best transit facility in the Pacific Northwest. Before the facility was opened, there was a long discussion between STA officials, city councillors, and the general public about what the name should be. Many names were proposed, but “The Plaza” ended up winning. In a slightly serious but mostly satirical piece, the Spokesman-Review made an argument for why “The Plaza” was the wrong choice.

For more than a century, the little town 20 miles south of Spokane has been overshadowed by its bigger neighbor.

All that’s left in Plaza is a Grange hall, a grain elevator, and maybe a dozen house.

Now, the Spokane Transit Authority has decided to heap on more indignities by calling its downtown transit hole, er, center, The Plaza.

The unincorporated town was settled in 1872, a year before Spokane Falls was officially recognized, and named after Plaza, PA.

At the turn of the century, Plaza had two general stores, a confectionery, two hardware stores, a blacksmith forge, a bank, two churches, and a school.

But Spokane began drawing Plaza’s commerce away and State Highway 195 was diverted so that it stopped going through town. Now the STA is stealing the town’s name. It’s a pattern of criminal neglect.

As unofficial (not to mention uninvited) legal counsel for the people of Plaza, we’d just like STA to note that we could be talking class action lawsuit. And that it’s not too late to change the name of that money pit.

How about The Rosalia?

Obviously, STA declined to act on the advice of the Spokesman-Review, and “The Plaza” stuck. Personally, I think it was the right choice. Though it’s primary function is a transit hub, it is also a center of commerce smack dab in the middle of downtown with multiple retail tenants, including a Subway that will be opening in the coming weeks. It’s also linked to other parts of downtown via the SkyWalk system. Changes will be seen in the coming months. The process has already begun with a modification of the Wall Street bus zones and opening the street to two-way traffic. Over the next year, major modifications will be done to the interior of the building, and the Sprague Street zones will likely be rebuilt to widen the sidewalks and create more room for waiting passengers. As changes happen, I’ll keep you all updated on that.

(The following was originally written by Blair E. Kooistra for his website “The Virtual Walla Walla Valley Railway.” The site is no longer active, and is only accessible via web crawlers.)

Incorporated on May 17, 1905, the Walla Walla Valley Traction Company was franchised by Walla Walla to operate trolleys in city limits. Despite Walla Walla’s  small size, it was blessed with an extensive street railroad system. Within a year, the WWTC had begun expanding southward 14 miles through the apple and cherry orchards along the Walla Walla River toward the twin Oregon towns of Freewater and Milton. Grading on the extension to Oregon began on March 20, 1906. The first rails were laid on September 6 the same year, and within five days, limited operations began. Regular operations to Milton began in April, 1907. The yellow cars made the 45-minute run hourly between 6 a.m. and midnight, meeting at a spring-switch equipped siding just south of the Walla Walla River.

END_OF_DOCUMENT_TOKEN_TO_BE_REPLACED

While doing a search for an old map of Ben Franklin Transit Route 44 (a route that was discontinued a long time ago), I came across something interesting.

Most of the guide is pretty generic summer stuff, but the biggest thing that caught my attention was that they included maps of the Ben Franklin Transit system from that time. Two major things to notice about this is that Interstate 182 hadn’t been opened yet (it would be opened later in the year) and the Blue Bridge was closed at this time for repairs. Below I’ll include clips of each’s cities routes.

END_OF_DOCUMENT_TOKEN_TO_BE_REPLACED 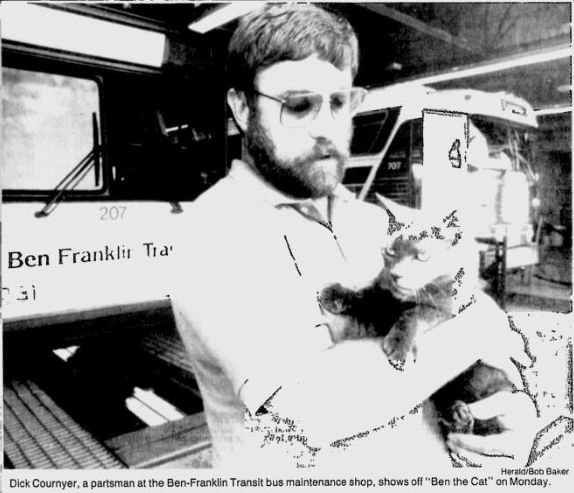 (By Fay Tolley, originally published in the Tri-City Herald on July 9, 1989)

And the crew at the Ben-Franklin Transit bus maintenance shop hopes she maintains her well-rounded figure.

The short-haired feline, dubbed Ben since she domesticated the workplace nearly three years ago, is a champion mouser and occasional snake snatcher, her custodians bragged Monday.

So the 22 maintenance workers who keep the system’s 53 buses in running order don’t have to worry about any unwanted varmints.

Don’t get the idea Ben’s day is all work, partsman Dick Cournyer said, stroking her mottled gray and orange hair.