In the late 1980’s, merchants in Downtown Spokane were trying to find a way to lure shoppers to the area. A long standing complaint back then (and even now) was that there was not enough parking in Downtown, or that the parking that was available was too expensive.

That’s where “Token Sense” came in.

Part of an effort to help market the central business district, Token Sense was launched as a collaboration between the Spokane Central Business Association (later renamed the Downtown Spokane Association) and Spokane Transit Authority. By making a minimum purchase of $25 or more at participating retailers, shoppers would receive a gold Token Sense token, which was then redeemable for 75¢ of parking at participating lots/garages, or for a one-way trip on any Spokane Transit Authority bus.

One of the “Token Sense” tokens.
Photo Credit: Zachary Ziegler

Officially started on October 31st 1988, the program was quite popular from the start. Through November 1988, more than 40,000 tokens were issued with 28,750 of them being redeemed at parking lots/garages and on STA buses. December 1988 saw continued growth, with an estimated 35,000 tokens being redeemed. In comparison, Seattle’s “Easy Streets” program, which Token Sense was largely based upon, saw token redemption peak at 21,000 in December 1987. Starting with 52,000 tokens, the program became overwhelmed with demand for more tokens early on and so 50,000 more tokens were ordered just a week after it started.

The Token Sense program continued to run for several more years, with multiple ads promoting the program seen in local papers through the early 1990’s. In 1996, the program was discontinued for good and replaced with the “Easy Pass” program, which involved more downtown retailers and parking lots/garages while still maintaining a free one-way ride on STA. (Presently it doesn’t appear that STA participates in this program anymore, though it’s still listed on the Downtown Spokane Partnership‘s website.)

Around the same time that the Token Sense program began to wind down, STA began running some trolley replica buses downtown. After years of proposals to run a trolley bus circulator system downtown, 3 trolley replica buses were purchased in 1994 and began running on the Plaza/Arena Shuttle (which ran as Route 27 back then, and now runs as Route 1). The current Plaza/Arena Shuttle service continues STA’s involvement in a collaborative parking program with the “CityTicket,” which is run with the Spokane Public Facilities District. Costing just $30 a month, it allows people to park at the Spokane Arena and catch Route 1 to and from Downtown every weekday. 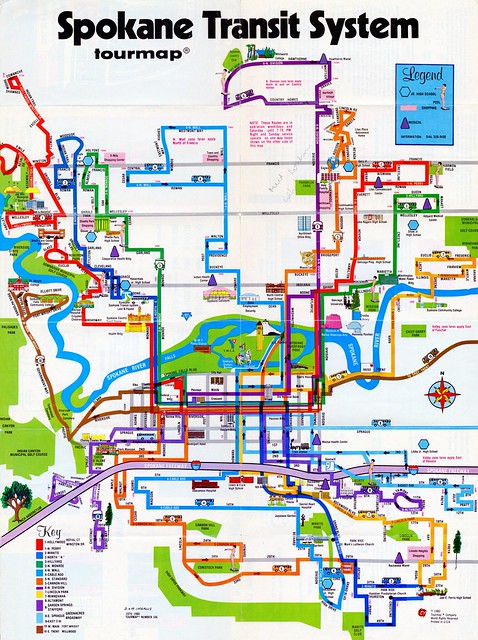 (This is the first post in the Transit Throwback series, which will feature a piece of transit history from Eastern Washington [examples include vehicles, schedules, news articles, and so on]. New posts will be scheduled on the 2nd and 4th Thursday of each month.)

Before Ben Franklin Transit was ever established in 1981, the GM New Look was already the most popular transit vehicle of its time. Coming after the GM “Old Look” of the 1940’s and 1950’s, which reined during the peak of the National City Lines era, it was a bus that was popular with both operators and passengers. During the production years of the GM New Look, which ran from 1959 to 1987, there were more than 44,000 of these buses built.

In 1961, just a short couple years after production of the New Look had started, a Virginia-based transit company in the Washington DC area called the Alexandria, Barcroft & Washington Transit Company received an order of 7 GM TDH-4517 buses (the specific model number, of which there were many during production of the New Look). Numbered 134-140 in their fleet, the buses were part of a 40 bus order that AB&W had placed for this model, with the first 20 being delivered in January 1960. Before WMATA acquired AB&W and took over fixed route bus service in 1973, AB&W’s buses served the suburban DC area of Virginia along and south of Columbia Pike (VA State Highway 244).

Somewhere down the line, some or all of 134-140 ended up at a used bus dealer in Minneapolis MN. After Ben Franklin Transit was officially established by voter approval on May 11, 1981, they had to find some buses to run service with. Via old articles from the Tri-City Herald, the plan seemed to be that BFT would buy some used buses from King County Metro (Seattle). A large critic of this plan was Doug Stiles, the owner and operator of Bassett Transit, a private Hanford commuter bus service. He argued that he could buy and refurbish used buses for essentially pennies on the dollar in comparison to the prices that BFT would be paying. Of course, Stiles was in a position where he had to be critical at all costs towards BFT, because even though the PBTA board passed a resolution that they wouldn’t compete with the Hanford commuter bus systems, he still had a lot of potential business to lose. (BFT later contracted with Bassett Transit in the late 1980’s to run Route 225 until BFT took over full operation of it a few years later, after which Bassett Transit went out of business.) With the King County Metro deal left dead in the water after that debate, BFT ended up buying a total of 37 used GM New Looks from that dealer in Minneapolis, some of them 35 feet in length and others 40 feet in length. They came in varying models and equipped with different features, as some had A/C, and some had power steering.

After operating the GM New Looks from the first day of service on May 10, 1982 through most of the 1980’s, BFT took delivery of 32 brand new Gillig Phantoms in 1988. (It would’ve been 33 but one was damaged in delivery, so a replacement was delivered the next year.) With the brand new buses in service, most of the New Looks were finally retired from service. It’s hard to track the fate of most of these buses, but it is assumed that a large number ended up as scrap metal. However, at least one bus was spared from “death.” A local businessman bought #121 (formerly AB&W #134) with the intention of using it as an instructional vehicle for a CDL driving school that he planned to establish. It would seem that luck was not on his side, as reportedly that plan never panned out. It’s not clear who brought it there or why it was brought there, but sometime after that plan failed it was parked in a vacant field near the Richland Airport, and today that is where it remains.

Having done nothing more than gather dust and stand as an occasional target to vandalism, the appearance of BFT #121 has changed little in the last 20 years. The old BFT livery is still preserved on this bus, though the BFT name itself was painted over after the bus was sold to the businessman with the CDL driving school plan. Apart from the farebox and transmission lever, all the key pieces of the bus are still there. Even the old destination sign roll is mostly intact, which when I last visited the bus I changed to “Not In Service” as a testament to the current fate of the bus. Last being registered in 1990 (as evidenced by the registration tag on the rear license plate), it is unknown if anyone even has a claim to this bus anymore. As it sits on land owned by the Port of Benton, it would seem likely that they have the best claim to the bus. Considering that it has sat in that field for some 20 years now, it is questionable if the Port of Benton even cares about doing anything with it.

As a small sidenote, it’s worth sharing that the bus was recently featured on the cover of the BFT schedule book, which used a copy of an oil painting done by BFT bus operator Daniel Schmidt. The painting can also be seen on an ad panel that BFT has inside the CREHST-owned GM TDM-5108 (former Hanford commuter bus).

To see more photos of BFT #121, view the rest of my photos of the bus on Flickr.