Is The Bus Too Big?

Every now and then, I like to go on Ebay.com and take a look at the different buses being auctioned. Sometimes I might find a subtle difference on one bus compared to another, sometimes I find some pretty old buses, and sometimes I find buses that are just plain weird. Weird is probably the best word to describe one of the buses I found for sale: An Orion II. 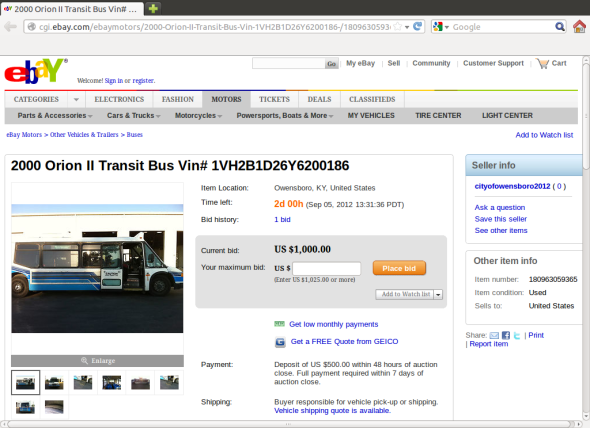 Auctioned by the City of Owensboro Kentucky

Figuring that someone else might get a kick out of this auction, I posted a link to it on Twitter.

Interestingly enough, I got a reply from someone I never would have expected: @YukonHulk

@ziggzagzac THIS KIND OF BUS PUNY WHITEHORSE SHOULD HAVE!!! NOT BIG CITY BUS!!!

Obviously, “YukonHulk” is referring to Whitehorse Transit‘s fleet. Currently, the fleet is composed of 10 NovaBus LFS units (model years 2006, 2008, and 2010), all in the 40’ length. For as long as I can remember, anti-transit residents of Whitehorse have been complaining that the buses were too big. (While he’s not anti-transit, my own father is among them.) Of course, as I mentioned in a previous post about Whitehorse Transit, ridership has been growing since the system revamp in July ’11.

So the question has to be asked: Is the bus too big?

(*Spoiler alert, the answer is no.)

As most of us know, buses come in all shapes and sizes, ranging from 20′ cutaways to 60′ articulated buses, and beyond. Sometimes, the bus is full of people. Other times, it’s not. Sadly, it’s those times when the bus is more empty than full that the detractors of public transportation really pay attention to.

Something that a lot of people fail to grasp is how a vehicle dispatch works in public transportation. Once the bus leaves the yard, it’s on the road all day. That’s why it’s crucial that the bus has enough room to hold a maximum capacity load of the route it’s being operated on.

Another thing we have to consider is that very few bus routes run at a maximum capacity load for the entirety of the day. However, it is more cost-effective to leave that one bus on the road all day, instead of driving “appropriately” sized buses to and from the garage throughout the day, which ends up costing more in driver hours and fuel.

Most importantly, regardless of the size of the bus, all buses cost the same to operate. Whether it’s a 30′ low floor or a 45′ over-the-road coach, all these buses are equipped with the same engines and the same transmissions. They use the same operators and the same amount of fuel. And they all carry the same members of the public who use public transportation

So in conclusion: Is the bus too big? No, no it is not.

*There are many, many other factors to consider, such as weight vs. traction, narrow neighborhood roads, and so on. This is just a generalization of the factors considered.