← Sunday Service May Be Returning
More ZEPS Electric Buses On The Way? → 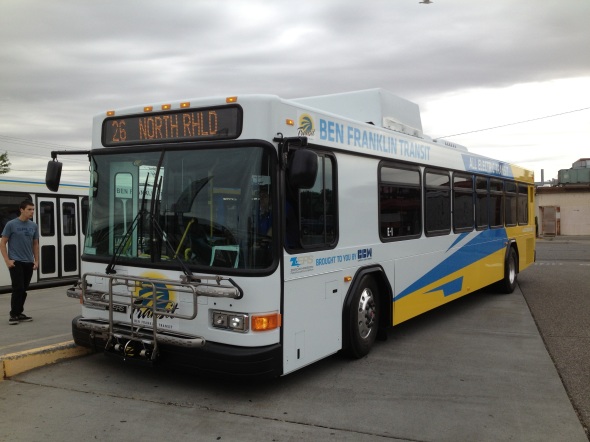 After a long wait, the ZEPS Electric Bus has finally begun rolling on the streets in the Tri-Cities. Last October, I first reported that Ben Franklin Transit would be launching an all-electric battery-powered bus built by Complete Coach Works of Riverside CA. While it was supposed to begin service last year, delays in the building of the bus (mainly waiting on the batteries to arrive from China) pushed the launch back to now. The bus has actually been in the Tri-Cities since last month, but it did not go into service immediately as BFT staff needed time to familiarize themselves with the bus, as well as clear up any potential operational problems (such as low hanging branches on the routes it is running on).

On Tuesday, I just happened to be at Knight Street TC in Richland on my way home when I saw the ZEPS Electric Bus arriving as an inbound Route 26. Since I’d missed a few previous chances at PR events to see the bus, I jumped at this chance and took a ride as it ran a trip on Route 23. Along the way, I took some notes about the bus:

Overall, I had pretty high expectations for the ZEPS Electric Bus and it did not disappoint. Based on what I’ve been told by BFT officials, the bus will be going into service during peak hours only for the time being. During both peak periods, it runs on a Route 23/26 interline. In the near future, there are also plans to test it on other local routes, but it will unlikely be seen on any intercity routes.

My recommendation to anyone who has the chance to take a ride on the ZEPS Electric Bus is to do so. As I’ve said before, this very well may be a small step into the future of public transportation.